Absolutely! Nazaré has the tallest waves in the world! – Portugal 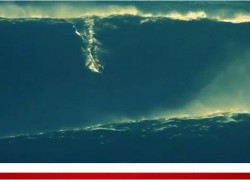 On Monday, U.S. surfer Garrett McNamara, 45, rode in Nazaré, Portugal, the largest swell ever ridden by a surfer.

Apparently, he sailed down from the top of a 100 feet wave, at Praia do Norte, a shoreline known to professional surfers to produce some of the biggest waves in the world.

In November 2011, over the Thanksgiving holiday, also in the same spot, McNamara reportedly had sailed down a 78 feet high wave, establishing for himself the Guinness record for the tallest wave to date.

The area, defined by rocks and known to suffers to be dangerous and extremely challenging, produces towering waves known to have every so often dragged riders too close to the cliff.  The spot is about 16,000 feet deep in places, and about 140 miles long.

On Wednesday, McNamara was still waiting confirmation of the size of the latest wave and whether a new record was set.

Meanwhile, while Nazaré authorities have asked a panel of international experts for an impartial judgement, analysts at the Faculty of Human Kinetics of the Technical University of Lisbon have already established the wave had reached 111.5 feet.

After these claims are verified, the Guinness World Of Records will officially record McNamara’s incredible feat, on January 28, 2013, off the coast of Nazaré, Portugal.

Born in Pittsfield, Massachusetts, and raised in Hawaii, McNamara has been surfing professionally since age 17. He first surfed Nazaré in 2010.