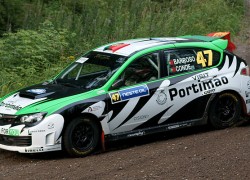 The 2011 WRC Rally Portugal takes place March 24-27, starting in Lisbon at Praça do Império and ending in Faro, Algarve. The rally is returning to Lisbon for the first time in 37 years. A total of 75 cars are on the entry list, and they will compete the 17 stages and 385kms across the country.

Racers Petter Solberg (Norway), Kimi Räikkönen (Finland) and Peter van Merksteijn Jr (Holand) are also competing for the prize. They began their season  at the World Rally Championship in Sweden. The Norwegian finished fifth (with three fastest times) and the Finn eighth place. Sebastien Ogier and Citroën won the event.

The 2011 WRC Rally Portugal marks the third round of the FIA World Rally Championship and will once again be hosted in the Algarve Stadium.