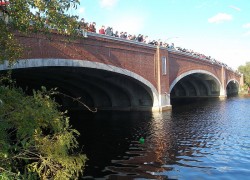 As usual, different teams of rowers compete for the first prize in these unique whaleboats from the Azorean archipelago.

The Azorean Maritime Heritage Society is a U.S. based non-profit organization, founded in 1997, to promote the historical contributions of Azorean sailors and whaleboat builders to the U.S. whaling industry. Based in New Bedford, MA, it maintains the Azorean Whaleman Gallery at the New Bedford Whaling Museum. The Azorean Maritime Heritage Society is the owner of the three boats that will be raced on the Charles River on June12.

The event is an opportunity for the public to learn more about Azorean-Portuguese history and its ties with the New England whaling industry. Inspired by the North American boat building heritage, the Azorean whalers developed a new whale boat model which was longer and better adapted to the seaworthiness and one of the most remarkable boat designs of the North Atlantic.

With the decline of the whaling industry, measures were taken to maintain its use for cultural, sports, environmental education, recreation and tourism. Nowadays, such measures ensure the preservation and the transmission of the whaling traditions to future generations.

The event is open to the public and admission is free.  In addition to the races, there will be a whaleboat sailing demonstration, including tours on the boats, an awards ceremony for crews competing and an opportunity to listen to some of the rich oral history behind whaling.

The 6th Annual Azorean Whale Boat Regatta is part of the program of the 6th Boston Portuguese Festival underway in Cambridge/Boston. Other activities for June 12 include a Portuguese Flag Raising Ceremony scheduled for 11:00am, at the Boston City Hall, with an address by the Consul General of Portugal, Paulo Cunha Alves, and a Proclamation by the Mayor of the City of Boston, Honourable Thomas Menino.