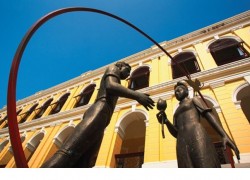 The Macau international literary festival, entitled ‘Script Road’, will take place between March 19 and 29, in the heart of the city, gathering literary personalities and artists from Macau and China and various Portuguese Speaking Countries, with the participation of local schools and universities.

This year ‘Script Road’ is bring more than 30 renowned guests to Macau, including local and international renowned writers, publishers, translators, journalists, musicians, filmmakers and visual artists from the Lusophone world.

Founded in 2012, by local Portuguese newspaper Ponto Final, and on its fourth edition, the Macau international literary festival is the first and only meeting in the world of literary personalities and artists from China and the Portuguese-speaking countries. The event is co-sponsored by the Macau University (UMAC), Macau Pen Club, the Institute for Civic and Municipal Affairs (IACM), Macau Government Tourist Office, Macau Education and Youth Affairs Bureau, the Society of Arts and Letters, the Portuguese Oriental Institute (IPOR), the Orient Foundation, Macau Closer, the Portuguese Bookshop and Casa de Portugal, as well as other public and private entities.