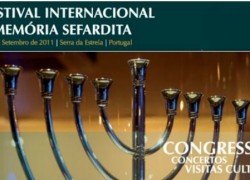 As part of the celebrations, the documentary “The Consul of Bordeaux” (O Cônsul de Bordéus) will be premiered September 19, at Teatro Municipal da Guarda (TMG). The film was directed by Francisco Manso and João Correa and produced by Take 2000.

Vítor Norte plays the part of Aristides the Sousa Mendes, the Portuguese Consul in Bordeaux, France, during the Second World War, credited with saving an estimated 30,000 lives, among them 10,000 Jews, in June of 1940. 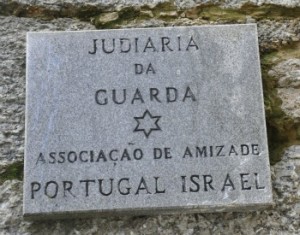 Granite plaque marking the location of the old Jewish quarters in the city of Guarda.

On September 19, the National Network of Jewish Quarters will be made public followed by a conference on the role of Portugal during World War II. An exhibit on Capitão Barros Bastos archives and guided visits to Jewish historic sites in Guarda will also take place.

The Guarda-Belmonte region of mainland Portugal was home to many Jewish communities for centuries. In the sixteenth centry the edict of expulsion of Jews from Portugal was proclaimed. The expulsion was not enforced, instead many Jews were forcibly baptized.

During the Inquisition (1536-1821), Jewish communities in Portugal went on hiding. In Belmonte they lived in secrecy for hundreds of years until modern times. They maintained their Jewish traditions by hiding all external signs of their ancient faith.

The origin of those communities go back to the 12th century and were only discovered in 1917, by a Samuel Schwarz, a Polish mining engineer.

After the Carnation Revolution of April 1974, and an article in the New York times in 1977, world interest in the Jews of Belmonte increased.

Many of them returned to Judaism in the 1970s. The synagogue in Belmonte, Bet Eliahu, was dedicated in 1996.

In 2003, the Belmonte Project to recover the Jewish community of Belmonte was founded under the auspices of the American Sephardi Federation. The Jewish Museum of Belmonte (Museu Judaico de Belmonte) opened on 17 April 2005.