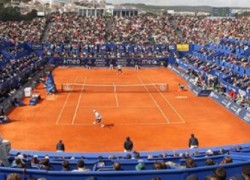 The Estoril Open, one of the most popular international tennis competitions — for both men and women — is underway.  The event is taking place at the Estádio Nacional in Oeiras, Portugal, from April 23 through May 1, 2011.

The 2011 editon has the participation of two of the world’s top 10 players — Robin Soderling (Ranked 4th on the ATP circuit) and Fernando Verdasco (Ranked 9th ). Fernando Verdasco, alongside Rafael Nadal (1st) and David Ferrer (7th), is now one of three Spaniards in the world top 10 tennis player list  — and one of the most prominent players during the past three seasons.

The Estoril Open began as an ATP event in 1990 —  to become a combined men’s and women’s tournament in 1998 – making it one of only three European spring clay court stops (also Roland Garros, Rome) to feature both tours playing side-by-side.

The Estoril Open was distinguished with the Award of Excellence from the ATP World Tour for the 2010 season as the Best European Tournament in the category of ‘Marketing & Promotion’.