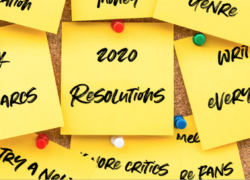 January is a time to pause, reflect and take stock of year’s past, and move forward into the next decade. As the new year begins, The Portuguese American Journal has interviewed a selected group of Portuguese-American writers about their New Year’s resolutions, goals, plans, and ideas.

What follows are our writers’ thoughts: funny and serious, heart-felt and predictive of the future.  So, cast a stone with us and see what they have to say to the question we posed:  What is YOUR new year’s resolution?

After thirty-three years on the faculty, I could step down at any time. But if I have a resolution, it’s a simple one: Do things because I want to do them, and not because others say that’s what they’d do. Let them do it then. As for me, my one concern is that students ask because they think it’s time for me to hang it up. On the other hand, I have a note from a student who informed me that I am an inspirational role model. Perhaps when those notes stop appearing, it will be time.

Anthony Barcellos, mathematician and author of Land of Milk and Money (the story of Portuguese immigrants from the Azores who settle on a dairy farm in California’s Central Valley.)

At the end of my father’s life, he was no longer able to walk. My New Year’s resolution is very simple: To slow down and notice every simple thing, starting with “I’m able to walk, I’m able to speak.”

Katherine Vaz, author of two novels, Saudade and Mariana, as well as two short story collections, Fado & Other Stories and Our Lady of the Artichokes & Other Portuguese-American Stories.

My 2020 resolution is to let go of toxic people around me.

Luis Goncalves, editor of Writers of the Portuguese Diaspora in the United States and Canada: An Anthology (Boavista) and Professor of Portuguese at Princeton

My resolution is to work on more translations of Portuguese-American authors to Portuguese and Azores Poets to English.  Working on an anthology, hoping it can see the light of day in late 2020, maybe!

Diniz Borges, director of the Portuguese Beyond Borders Institute, at Fresno State University

My resolutions for 2020 come from the audience who came out for my play, Fado last year.

1.To stand in solidarity with my fellow Luso/a writers, let’s not lose heart, let’s keep on going.

2.All of the advocates, all of my colleagues, made it possible for me to write this play.

3.To rest, as rest is needed to gather strength.

4.To make a plan but be willing to change. I have so much I want to write that I have to make a year-long schedule, but I’m grateful for opportunities which throw that schedule off.

Elaine Ávila’s newest play, Fado—the Saddest Music in the World, takes place in old Lisbon, and was performed this fall at the Firehall Arts Centre in Vancouver, British Columbia.

Well, let’s see. A resolution… Develop an algorithm that makes the word algorithm as antiquated as the word paradigm has become in recent years. Crack the entrance code to the New Yorker poetry club. Write a poem, entirely in Portuguese that gives off the essence of my grandmother’s soul. Visit Terceira with my wife and our dog; all the while, staring at the Atlantic in complete astonishment and wonder; knowing that our tickets were one way.

Sam Pereira, his books include The Marriage of the Portuguese, Brittle Water, A Cafe in Boca, and Bad Angels.

Resolution… You know my birthday is December 31. So this could be a resolution or a candle blower’s incantation but I plan to reacquaint myself with the subtle but useful art of lock picking which I was quite accomplished at as a child. Locks have a tension right before they release or turn like a story. So here goes 🙂

My resolution is to spend less time on Facebook, arguing with people, even when they’re wrong.

Darrell Kastin, author of The Undiscovered Island, The Conjurer & Other Azorean Tales, and Shadow Boxing with Bukowski.

My New Year’s resolution is to transpose palindromes. But, apart from that, as Joan Nestle once wrote, “I have no other name than the one I carry.”

PaulA Neves, author of capricornucopia: (the dream of the goats)

I guess you could say that my New Year’s resolution is to learn how to play the ukulele.

Nancy Couto Vieira, author of The Face in the Water and poetry editor of Epoch (literary journal)