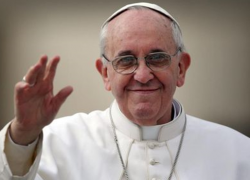 Pope Francis has confirmed he will visit Fátima, Portugal, in 2017, on the 100th anniversary of the Marian Apparitions.

According to the Leiria-Fátima Diocese, the announcement of the visit was given directly by Pope Francis to Bishop of Leiria-Fátima, António Augusto dos Santos Marto, during a private audience at the Vatican last week.

‘If God gives him life and health,’ the Holy Father wants to be in Cova da Iria to celebrate the centenary of the Apparitions of Fátima, the announcement stated.

António Augusto dos Santos Marto is the first Portuguese bishop to meet privately with Pope Francis. During the meeting, the Holy Father dispensed a ‘special blessing’ to Portugal, according to Bishop Marto.  Pope Francis has received various invitations to visit Fátima, but this is the first time he has confirmed his desire to go, authorizing his intention to be made public, Bishop Marto has revealed.

Pope Francis is the fifth Holy Father to visit Cova da Iria, Fátima.  Pope Paul VI visited the Marian Sanctuary on May 1967, on the fiftieth anniversary of the first apparition. Pope Paul VI visited Fátima on May,1967, followed by Pope John Paul II on May, 1987, and Pope Benedict XVI on May, 2010.

Fátima has been permanently associated with the Marian Apparitions that occurred in Cova da Iria, in 1917, where three shepherd children reported seeing the Blessed Virgin Mary between May 13 and October 13, 1917. The apparition re-occurrences were later recognized officially by the Catholic Church.