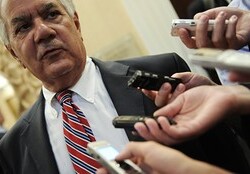 Rep. Barney Frank (D-Mass.), 71, a member of the Congressional Portuguese American Caucus, announced Monday he will not seek re-election in 2012 for a 17th term in Congress.

The liberal Democrat, representing Massachusetts’ Fourth District, will retire because, according to a source close to the Representative, he would have to run in a newly drawn district in 2012, which includes more conservative voters and would not include the blue-collar city of New Bedford.

Speaking at a press conference in Newton, MA, the congressman said about his future plans: “Let me be clear, I will neither be a lobbyist nor a historian.”

Rep. Frank, who was previously chairman of the House Financial Services Committee, was a ranking member when Democrats lost the majority in the 2010 midterm election.

A New Jersey native, schooled at Harvard University and Harvard Law School, he worked in Massachusetts politics before being elected to Congress in 1980.

Always attentive to the needs and interests of the Portuguese American community in his district, Barney Frank has been a facilitator in the diplomatic relations between the United States and Portugal.

Recently, André Bradford, Regional Secretary of the Presidency of the Regional Government of the Azores met with Congressman Frank, at his Massachusetts office, to address issues regarding to the enhancement of the partnership between the Azores and the USA and the U.S. military presence in Lajes.

Other topics addressed included the evaluation of the consular presence in the Azores, issues related to immigration laws and the analysis of the reinforcement of funding for civil cooperation projects with the Azores under the Agreement on Cooperation and Defense between Portugal and the United States.

Congressman Dennis Cardoza (D-CA), Co-Chair of the Congressional Portuguese American Caucus, also announced recently he will not seek re-relection in 2012, ending a career that dates back to three decades ago representing the people of Central Valley, California.

In January 2011, working with the National Organization of Portuguese Americans (NOPA) Rep. Dennis Cardoza and Rep. Jim Costa led the process to reinstate the Congressional Portuguese American Caucus by agreeing to be co-chairs, moving it forward and making the Caucus official in May 2011.