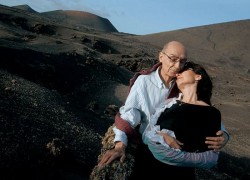 The Academy of Motions Picture Arts and Sciences (Academy Awards) announced Monday in Hollywood the nomination of Fado song “Já não estar” [Being no more], interpreted by Camané, for the 2012 Oscar for Best Original Song. The Academy Awards nominated 36 songs competing for the Oscar under the category of Best original Song.

The composition, with lyrics by Manuela de Freitas and music by José Mário Branco, is featured in the documentary film titled José & Pilar celebrating the life of Portuguese writer José Saramago, the 1998 Nobel Prize of Literature, and his lifelong companion Pilar del Rio.

A co-production of Fernando Meireles (award-winner producer of City of God/Brazil) and Pedro Almodóvar (Spain), directed by Miguel Gonçalves Mendes, the documentary  José & Pilar is competing for the nomination at the Academy Awards. Almodóvar won an Academy Award for “Talk to Her” in 2002 for best original screenplay.

Launched in Portugal, Spain and Brazil, the film is scheduled to be distributed in April 2012, in the United States, by Outsider Pictures.

The final list of nominations for the 2012 Oscars will be known in January 24, 2012. The 86th Academy Awards Oscars ceremony will be held February 26, in Los Angeles, California.

The Best Original Song nominations are: