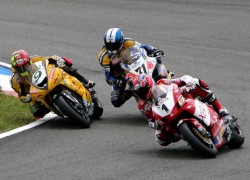 Valentino Rossi, Toni Elias and Jorge Lorenzo are just some of the circuit winners in recent years at Estoril.

One of the most demanding international circuits on the calendar, the first MotoGP race was held at Estoril in 2000.

Built in 1972 by Fernanda Pires da Silva, the Estoril circuit was used mainly for European F2 races in the seventies and was very popular only until 1977, when it disappeared from most international race calendars.

Unlike some races, which are fixtures on the calendar, Estoril hasn’t found a regular date and runs in either the Spring or Fall. Last year’s race was run on late October. The year before, it ran in early October. In 2008 it was held on April 13.   Read more>>>