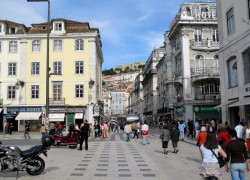 The resident population of Portugal increased by 199,000 people (1.9%) in the last decade to a total of 10,560,000 — reported Thursday the National Institute of Statistics (INE) based on preliminary results from the 2011 Census underway.

The resident population in the Azores islands also increased 1.79%, over the past ten years, to 246,102 inhabitants.

In Ponta Delgada, the capital city of the Azores, with a population of 68,770, there was an increase of 4.4 percent. The population of the municipality of Ribeira Grande, in São Miguel, increase by 12.5%.

The largest population growth occurred in the regions of Algarve and Madeira. In these regions, the growth of households reached 36.9% and 36% respectively. The number of buildings also increased significantly in these two regions to 24.9% and 23.0% respectively.

For the first time in its history, the national census was offered online and took into account same sex couples as well as couples living together. Also for the first time, buildings and dwellings were taken in account by the Census takers. The Census reported the existence of 5,879,845 dwellings and 3,550,823 buildings in the country.

Around 30,000 people were hired to collect data for the 2011 Census underway since March 2011. The project was estimated to cost €43 million-euros ($62 million USD). The final results will be known in July.