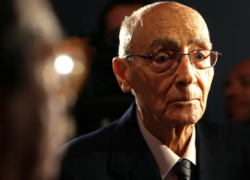 Throughout the year, until November 2022, Portugal and many other countries, are celebrating the centenary of the birth of José Saramago, the winner of the Nobel Prize for Literature (1988),  with an ongoing extensive program of events.

According to the award committee, Saramago, “who with parables sustained by imagination, compassion and irony continually enables us once again to apprehend an illusory reality.”

Saramago published his first novel, Land of Sin, in 1947. He gained international acclaim when his work Memorial do Convento (1982) was translated as Baltasar and Blimunda in 1987. His books – The Year of the Death of Ricardo Reis (1984); The History of the Siege of Lisbon (1989) and The Gospel According to Jesus Christ (1991) are among his most celebrated earlier works.

A member of the Portuguese Communist Party (PCP) since 1969, Saramago was amongst the most prominent individuals who promoted the April 1974 Revolution (Carnation Revolution), which resulted in regime change in Portugal, from the Oliveira Salazar’s dictatorship, to a modern democracy.

After creating the José Saramago Foundation in 2007 at Casa dos Bicos, in Lisbon, he moved out of Portugal with his wife, journalist Pilar del Río, the Spanish translator of his work, to live in Lanzarote, Canary Islands, till his death on June 18, 2010 at the age of 87.

José Saramago was born on November 16, 1922, in Azinhaga do Ribatejo, to become a prolific writer with over two million books sold in Portugal and worldwide. His intellectual, artistic, human, and civic stature makes him one of the most prominent names in Portuguese literature, and a major figure in world literature. His work has been translated into more than 25 languages.

“The worst pain isn’t the pain you feel at the time, it’s the pain you feel later on when there’s nothing you can do about it. They say that time heals all wounds, but we never live long enough to test that theory.”

“Sometimes I say that writing a novel is the same as constructing a chair: a person must be able to sit in it, to be balanced on it. If I can produce a great chair, even better. But above all I have to make sure that it has four stable feet.”

“We would understand much more about life’s complexities if we applied ourselves to an assiduous study of its contradictions, instead of wasting time on identities and coherences, seeing as these have a duty to provide their own explanations.”

“You never know beforehand what people are capable of, you have to wait, give it time, it’s time that rules, time is our gambling partner on the other side of the table and it holds all the cards of the deck in its hand, we have to guess the winning cards of life, our lives.”

“I consider books to be good for our health, and also our spirits, and they help us to become poets or scientists, to understand the stars or else to discover them deep within the aspirations of certain characters, those who sometimes, on certain evenings, escape from the pages and walk among us humans, perhaps the most human of us all.”

“Sometimes we ask ourselves why happiness took so long to arrive, why it didn’t come sooner, but appears suddenly, as now, when we’ve given up hope of it ever arriving, it’s likely then that we won’t know what to do, and rather than it being a question of choosing between laughter and tears, we will be filled by a secret anxiety to which we might not know how to respond at all.”