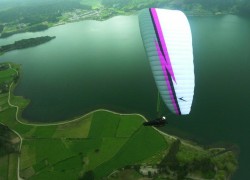 Paragliding in the Azores originated on the Island of Faial in 1990. In 1993, the International Paragliding Festival was launched festival. Clube Asas de São Miguel, a training school, was founded in 1997.

Almost all of the 9 Islands of the Azores provide excellent flying sites for the sport.

Created in 1952, paragliding is a new recreational and competitive flying sport. A paraglider is a free-flying (no engige), foot-launched glider aircraft. Controls are held in each of the pilot’s hands.

Despite not having an engine, paraglider flights can last many hours and cover many hundreds of kilometres. Training and certification are required to operate the paraglider.