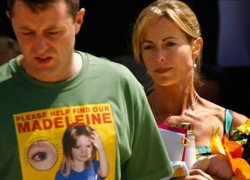 The mystery of what happened to Madeleine McCann is slipping unsolved into its ninth year. Investigations seem set to continue at high cost but dubious worth.

The british Metropolitan Police Service investigation codenamed Operation Grange has so far cost £10.5 million (the official figure), but has it come up with any substantive evidence to show what happened to Madeleine? The Met is not saying.

In a Christmas message expressing “new energy, new opportunities and new hope,” Kate and Gerry McCann thanked the Met for the “progress” made over the year, but they are reportedly poised to use the £750,000 left in their Find Madeleine fund to hire a new team of private detectives when the Operation Grange investigation ends. 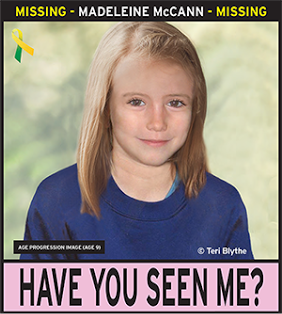 A small poster with an age-enhanced
image of Madeleine McCann.

The Met disclosed in October it was scaling down the Operation Grange team from 29 full-time officers to just four.

In its early review work starting in 2011, they collated more than 40,000 documents from UK and foreign law enforcement agencies as well as various private investigation companies.

Some of this had to be translated into English, facts had to be cross-referred and diligently analyzed in the search for new lines of inquiry before the review was turned into a full-scale investigation in mid-2012.

Since then the Operation Grange team say they have raised 7,154 actions and identified 560 lines of enquiry, taken 1,338 statements and collected 1,027 exhibits. More than 30 international requests have been sent to various countries asking for work to be undertaken on behalf of the Met.

Officers have investigated more than 60 persons of interest, considered 650 sex offenders and looked into reports of 8,685 potential sightings of Madeleine around the world.

That all seems clear enough, but to many sceptics who have followed the case closely it is all a show, a sham, a cover-up, a whitewash, a conspiracy to hide the truth. They allege the claim that Madeleine was abducted, which her parents have always been adamant about and which the police and mainstream press in the UK seem to accept, is a fabrication.

The Met, of course, will have none of it. Poring through a vast wealth of information and theories in the extraordinary circumstances of investigating a missing child years later in another country was always going to be an immense task and required a full team of 29 staff working on it, is the official view.

“While there remain lines of enquiry to follow, the vast majority of the work by Operation Grange has been completed,” according to the Met.

The team now consists of a detective sergeant and three detective constables who have been working on the case for a long time. They will continue to be overseen by Detective Chief Inspector Nicola Wall. Officers will deploy to Portugal if required to do so.

The Met’s Assistant Commissioner Mark Rowley has stated that every possible measure is being taken to find out what happened to Madeleine.

“We still have very definite lines to pursue which is why we are keeping a dedicated team of officers working on the case.

“The Portuguese police remain the lead investigators and our team will continue to support their inquiry. They have extended every courtesy to Operation Grange and we maintain a close working relationship. I know they remain fully committed to investigating Madeleine’s disappearance with support from the Metropolitan Police.”

The willingness of Madeleine’s parents to go private again begs the question of how any latter-day team of private detectives could hope to solve a case that seems to have stumped not only Operation Grange, but two lengthy investigations by the Portuguese judicial police and expensive probes by three previous teams of private detectives.

An unnamed source quoted by in the British press shortly before Christmas said: “We don’t know exactly when Operation Grange will end but while it continues it has the finest technology and analysts.”

The source added poignantly: “Private investigations are expensive and do not have anything like the range and capabilities available to the Yard.”

The Operation Grange inquiry may close in a few months by which time another landmark in this costly case will probably have been reached. A ruling could come at any time now on former detective Gonçalo Amaral’s appeal against the outcome of the civil action brought against him by Kate and Gerry McCann

The McCanns were awarded €500,000 plus interest in damages over his book, Maddie, the Truth of the Lie.

As to what really happened to Madeleine in Praia da Luz in May 2007, with the passing of each year we seem no closer to learning the whole truth.