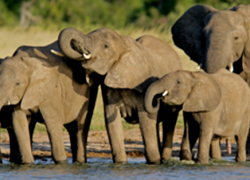 Carved elephant tusks displayed and offered for sale by auction at the recent Algarve International Fair were a timely reminder of Portugal’s long association with the ivory trade and of stepped-up global efforts to protect elephants by stopping commerce in ivory and destroying ivory stockpiles.

“Is it ever okay to sell elephant ivory?” a visitor to the fair asked herself on seeing three elaborately carved pieces said to have originated in South Africa “circa 1960,” with estimated auction values of between €240 and €600.

Current initiatives in Europe and in the United States are aimed at saving elephants, which have been pushed to the brink of extinction by poachers and smugglers cashing in on the continuing massive demand for ivory.

The pieces were on offer at the Algarve fair the day before Britain’s Prince William teamed up with sports stars, including football legend David Beckham, Wimbledon champion Andy Murray and former South African rugby captain Francois Pienaar, to launch a United for Wildlife campaign on behalf of endangered species.

The campaign is but part of a much wider effort involving government lawmakers and leading conservation groups who are trying to put an end to the trade in huge quantities of “white gold,” first shipped in from the west coast of Africa by the Portuguese in the fifteenth and sixteen centuries.

Over the past hundred years, the population of elephants in African has been cut by half. They are being slaughtered at a rate of 30,000 to 35,000 a year.

Ways to curtail escalating exports of ivory from the European Union to China and elsewhere are the subject of discussions at inter-governmental meetings in Brussels and Geneva this month and next.

Meanwhile, conservationists point out that any legal loopholes will allow poached ivory to be laundered into the ‘legal’ trade and thus fuel the continued killing.

“Weak European laws on ivory trading are a clear and present danger to Africa’s elephants, and a gift to poachers and smugglers who feed almost limitless demand for ivory in East Asia”, says Daniela Freyer of Pro Wildlife. 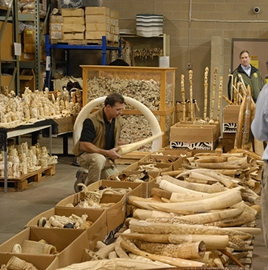 Twelve thousand pounds of ivory that was destroyed in 2013 in Hong Kong.

Mary Rice, of the Environmental Investigation Agency, added: “We are calling on EU countries to halt all ivory trade within, to and from the EU, and strengthen enforcement. This includes measures to destroy their stockpiled ivory – both carvings and raw tusks – irrespective of its source and alleged age. We will only be able to end the elephant poaching crisis when the trade fuelling it is banned and demand curbed.”

The United States administration has announced a federal ban – with very narrow exemptions – by prohibiting all imports and exports and resales of ivory by auction houses and other dealers.

Lisbon is said to have more ivory items stocked by antique dealers, jewelry shops, flea markets and other outlets than any other much larger city in southern Europe.

An academic study a few years ago revealed that of 626 ivory items seen for sale in Lisbon, the most numerous were antique figurines from Europe and Asia, followed by busts and figurines carved in the 1970s from Angola, and antique crucifixes from India, Europe and Sri Lanka.

Nearly all the items seen during the study were made before the ban introduced by the EU Convention on International Trade in Endangered Species of Wild Fauna and Flora in 1989.

Some, however, were being sold illegally because Portuguese law requires that ivory pieces to be registered. Since 2004, privately owned ivory is required to be registered as well, but most has not been recorded.

Portugal already has at least 20 tons of registered tusks and the Portuguese authorities intercept several hundred pieces of ivory (both raw and worked) coming into the country illegally each year, almost all from Africa, especially Angola, Mozambique and Senegal.

Despite this, much ivory is thought to be successfully smuggled into Portugal, often hand-carried through the airports. Another source of ivory is the Internet, which enables new ivory items to be smuggled in by post or courier service. Nearly all of it is for personal ownership rather than for sale.

In February this year, Prince William reportedly told zoologist Jane Goodall that he would “like to see all the ivory owned by Buckingham Palace destroyed.” He was duly rebuked by his father, Prince Charles.

Apparently Charles thought his son’s remark was somewhat naive and stupid as there is a difference between supporting action against illegal dealing and Buckingham Palace retaining an important historical collection of artefacts.

The royal spat was an example of the kind of heated feelings associated with ivory and the killing of elephants.

The same week as the Algarve fair, Spain’s King Juan Carlos announced his intention to abdicate in favour of his son, Crown Prince Felipe, following much irritation expressed by Spaniards since the king’s hunting trip to Botswana in 2012. The trip, which was supposed to be completely secret, resulted in the king falling and breaking a hip after being photographed posing with a rifle over his shoulder in front of a dead elephant.

Wealthy Chinese buyers are reportedly fostering a boom with the illegal trafficking of ivory from Tanzania and Kenya north to Cairo where backroom markets are busy, even though selling ivory in Egypt is against the law. Ivory bought in Cairo is said to fetch up to ten times the price in China.

The auctioneer of the Algarve company selling the carved pieces at the Algarve fair assured us that, “the owner of the ivory items provided the valid certificates to accompany the pieces. These certificates were on hand and available for perusal….. We act as agents for our clients and endeavor to work to the rules and regulations governing the sale of all items presented for auction.”

A man visiting the fair who expressed disapproval about the pieces, said later that the woman looking after the exhibits dismissed his objection with a shrug of the shoulders.

The visitor who wondered to herself about the ethics of dealing in even validated ivory, remarked afterwards: “Having visited an elephant sanctuary in South Africa I can tell you that elephants are amazingly elegant and surprisingly quiet and gentle creatures for their size. All of them had been rescued from botched poaching attempts, some with missing tusks and damaged limbs.

“An outstretched handful of peanuts were gratefully hovered up by a tiny baby while an older elephant presented a curled up trunk, an adapted trick because it had been caught in a poacher’s trap.”

What she found especially repugnant at the fair was that the carved ivory pieces, “relics of animal abuse,” were on display for all to see close to stands promoting rescue centers, services and suppliers concerned with the well-being of domestic animals.