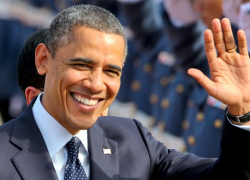 The 44th President of the United States, Barack Obama, will be the keynote speaker at a conference titled ‘Climate Change Leadership Porto 2018 Summit’ taking place on Friday, July 6, at the Porto Coliseum.

The event will address environmental issues focusing on climate change and solutions. Climate change was one of President Obama’s main concerns when he was in office.

About 3,000 guests will attend the conference, for the most part scientists, businessmen and politicians.

President Obama’s speech will be the last conference of the day before the closing. He will speak on the impacts and challenges of climate change around the world.

The event is organized by the Advanced Leadership Foundation, a North American NGO associated with the Democratic Party. Other notable speakers include Mohan Munasinghe, the 2007 Nobel Peace Prize winner and Irina Bokova, former head of UNESCO.

According to Portuguese newspaper Expresso, the total bill for the conference is €1 million, of which half is to pay President Obama’s fee.

President Obama’s intervention ‘A Conversation with Barack Obama: The impacts and challenges of climate changes in the World’ will be moderated by Juan Verde, president of the Advanced Leadership Foundation.

The Advanced Leadership Foundation‘s goal is to create a network of global future leaders who will gain the skills and experiences needed to benefit their economies, companies, communities and their countries.

A “Porto Protocol” will be signed as a written “commitment with the future” by organizations committed to fight climate change. The protocol will call for action in favor “of for less harmful environment solutions,” said organizer Adrian Bridge.

The ‘Climate Change Leadership Porto 2018 Summit’ is an international conference that seeks to find practical short-term and long-term solutions for the agricultural sector to defend itself from the consequences of global warming. Porto city is a UNESCO World Heritage Site since 1996.The former US President was last in Portugal in 2010, for a NATO summit. He will travel to Spain, Kenya, and South Africa in July.