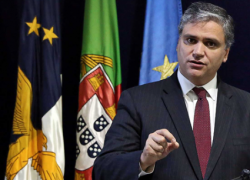 The United States are in “gross violation” of the spirit of the last bilateral agreement held in Lisbon, on February 11, the President of the Government of Azores, Vasco Cordeiro, said Friday in a statement to the press in Ponta Delgada.

President Cordeiro was referring to a lay-off notification sent by the United States Air Force to both the Comando da Zona Aérea dos Azores, the headquarters of the Azores air zone authority, and the Comissão Representativa dos Trabalhadores, the committee representing the Portuguese civil workers at the Lajes Field on Terceira island.

According to the bilateral negotiations, held in Lisbon on February 11, it was agreed that Washington would hold a final decision and wait until an upcoming meeting took place, between officials from the two countries, before going ahead with the lay-off plan. The meeting was scheduled to be held in Washington on May or June.

“Our understanding is that the upcoming meeting would be one more opportunity to address the issue and not the final attempt by the US to consummate their bidding against the will of Portugal, as it appears to be the case,” stressed President Cordeiro.

President Cordeiro remarks followed actions taken by Portugal’s Minister of Foreign Affairs, Rui Machete, summoning on Thursday the US Ambassador in Lisbon, Roberto Sherman, to protest against the lay-off announcement in violation of the February 11 bilateral agreement.

“We wish to call the attention to the fact that such proceedings shouldn’t remain just words and that there are consequences” said President Cordeiro. He also stressed that the way the process is evolving is “unfairly and unreasonably detrimental to the dignity of the relationship between the two countries.”

Early in January, the United States Secretary of Defense, Chuck Hagel, had confirmed the Pentagon’s decision to downsize the US presence in the Lajes Field. The decision will save the Pentagon an estimated $35 million annually. Downsizing the Lajes Field, the island’s second largest employer, will significantly impact the local economy.

The Azores (population 250,000) is a region of Portugal composed of nine islands. The archipelago discovered by Portuguese explorers in the 15th century, became an Autonomous Region of Portugal in 1976. The government of the Autonomous Region of the Azores includes the Legislative Assembly, composed of 57 elected deputies, elected by universal suffrage for a four-year term; the Regional Government and Presidency, with parliamentary legitimacy, composed of a President, a Vice-President and seven Regional Secretaries responsible for the Regional Government executive operations. The Autonomous Region of the Azores is represented in the Council of Ministers of the Central Government by a representative appointed by the President of Portugal. Vasco Cordeiro, 41, the leader of the Socialist Party (PS) in the Azores, was sworn Regional President of the Government of the Azores on October 14, 2012.