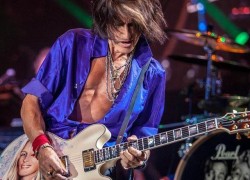 Recently, Aerosmith’s lead guitarist Joe Perry was bestowed with the 2017 ‘Les Paul Award’ at the NAMM TEC Awards convention, one of the top music product trade shows in the world.

Of Portuguese and Italian descent, Joe Perry is the consummate guitarist who is also a singer, song writer and lyricist. It is no wonder Rolling Stone magazine included him on their list of “100 Greatest Guitarists of All Time.”

At the NAMM TEC Awards, Hollywood Vampires bandmate and actor Johnny Depp presented Joe Perry with the honor, calling him “his hero” and “the reason I picked up the guitar in the first place.”

“NAMM” is the famous National Association of Music Merchants, an annual music and technology convention, held in Anaheim, California.

Aerosmith, considered by many to be “America’s Greatest Rock and Roll Band”, started as a garage band in Boston in the early ‘70s. According to Forbes, the band has gone on to be the bestselling American rock band of all time, with over 150 million albums sold worldwide and over 70 million just in the U.S.

In an exclusive interview for The Washington Times, Joe Perry talked with journalist Susan L. Hornik (*) about receiving the honor.  Hornik was also able to get some exclusive insight into Perry’s Portuguese background for the Portuguese American Journal’s readers.

About his Portuguese upbringing and on how much it stayed with him, influencing his musical inclination, Joe Perry told Hornick that, indeed, he regrets not having retained more from that culture.

“My father never spoke Portuguese in the house. My mother never spoke Italian. They were first generation American kids. That’s how they wanted to raise us. I look back at it, and I think, ‘well, I kinda missed out on a lot of stuff’,” he said.

Still looking back, Joe Perry realized that not all was lost. He learned how to appreciate the guitar with his Portuguese uncle.

“What did rub off; my uncle had a Portuguese guitar, it looked like a ukulele, it was homemade. Every Christmas, he would take it out from behind the couch, and play a few Portuguese folk songs. That was my first exposure to a stringed instrument, with frets. I was always fascinated with it; as far back as I can remember,” he told Hornik.

“From that one thing, it obviously had a huge impact on me. So not much culture, though my grandmother used to make great Italian food. I would love to know more though about Italian and Portuguese, considering how much time we spend in Brazil. We are going back there to tour,” he added.

Joe Perry also revealed that his father is from Madeira Island and that he and his wife are planning to visit the island sometime soon.

He said, “One of these years, my wife and I are going to Madeira, Portugal, where my father came from. That’s probably why I like hot weather, because it’s semi tropical there. I am just one generation away from that.”

About his plans for the near future and how many people think Aerosmith would be great at the next Oldchella “Desert Trip,”  Joe Perry told Hornik that he has no master plan.

“We are just starting to put the tour together for next year in the States. I am sure it’s on our short list….We just want to play every place that we can, and hit some of those festivals we have never done before. It would be great to play there.”

Millicent Borges Accardi, who also contributed for this article, is a Portuguese-American poet, the author of three books: most recently, Only More So. She has received fellowships from CantoMundo, the National Endowment for the Arts, Fulbright, Fundação Luso-Americana (FLAD) and California Arts Council. Follow her on Twitter @TopangaHippie