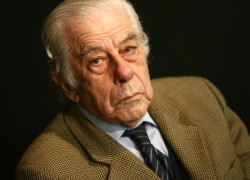 Portuguese landscape architect Gonçalo Ribeiro Telles, 91, is the recipient of the 2013 Sir Geoffrey Jellicoe Award, by the International Federation of Landscape Architects (IFLA), which represents the worldwide profession of landscape architecture.

Established in 2004, the award is the highest honor that the International Federation of Landscape Architects can bestow upon a landscape architect. The award is bestowed annually on an academic, public or private practitioner whose work and achievements are respected internationally.

IFLA recognizes a living landscape architect “whose lifetime achievements and contributions have had a unique and lasting impact on the welfare of society and the environment, and the promotion of the profession of landscape architecture.”

The International Federation of Landscape Architects is an organization that represents the landscape architectural profession globally in the realization of attractive, equitable and sustainable environments.

Born in Lisbon in 1922, since 1960 Gonçalo Ribeiro Telles has envisioned and given voice to the development of a landscape policy in Portugal, from large region-wide landscape projects to planning small parks and gardens including the development of the City of Lisbon Green Plan and the Gulbenkian Gardens. Also an active politician, he was a founder of the People’s Monarchist Party and the ecologists’ Party of the Earth.