Brexit: Can the silly season get any sillier? By Len Port

Britain’s oldest ally has been trying to make sense of the hullabaloo over the referendum, but it hasn’t been easy.

For example, last weekend Tony Blair said Britain might want to change its mind. And he was talking about Brexit, not the Chilcot report.

Back in February, it was “after a huge amount of heartache” that Boris Johnson finally made up his mind to stab his friend David Cameron in the back and campaign for ‘leave’. What he really had in mind was to take over the prime minister’s job.

After their Brexit victory, Michael Gove suddenly changed his mind about supporting Johnson for the Tory leadership and decided instead to betray Boris and run himself.

Andrea Leadsom used to think that leaving the EU would be “disastrous” for Britain. Then she changed her mind, campaigned for Brexit and now sees herself as the new Margaret Thatcher. There is at least one major difference. As even Mrs Leadsom may recall, the lady (the grocer’s daughter) was “not for turning”, i.e. changing her mind.

Theresa May campaigned for Britain to stay in. Now she is the most likely person to be tasked with formally leading Britain out.

“For the sake of the party and Britain it must be May”, asserted the Daily Mail as the Tory leadership contest got underlay this week. Before the referendum. one of the most vehement critics of ‘remain’ campaigners like Theresa May was none other than the Daily Mail.

Sinister plots were being hatched over on the other side. Jeremy Corbyn’s parliamentary colleagues want him to step down. The majority of the Labour Party voters want him to stay. But Corbyn is not for quitting or changing his mind, not just yet anyway.

The referendum ‘debate’ was steeped in scaremongering, misinformation and lies. It has produced distrust, division, depression, desperation, fears and tears. And for what? Britain is coming out but no one knows where is it going.

It’s a bit more than a mess. According to the media, “the Conservative Party is in flames,” the Labour Party is “tearing itself apart” and “imploding”. Brexit has been likened to a revolution, but no one is talking about carnations.

National votes on sovereignty could become fashionable so we’d better sort out the right plural: referendums or referenda? Millions of Brits, including expats, have petitioned for a second referendum on EC membership. Independence ballots could be in the offing in Scotland, Northern Ireland, Spain… and, yes, Portugal.

Portugal is not exactly a pillar of political stability. It’s minority Socialist government is deeply pro-EU, but it depends on the support of the far-left who want little or nothing to do with Brussels.

The government was “saddened” by Brexit and doesn’t want a Portexit, but it does want less austerity. The IMF wants more. Portugal has less than three weeks to correct its excessive deficit and avoid fiscal sanctions from the European Commission. If sanctions are imposed, the Left Bloc plans to demand a referendum on EU membership.

Whatever happens we have the bedrock of the Anglo-Portuguese Alliance. But maybe it’s just as well the alliance is based on the Treaty of Windsor of 1386. The United Kingdom wasn’t around in those days. Portugal signed the treaty with England which the UK looks like becoming once again.

Unfortunately the alliance is not infallible. If only there had been a referendum in 1588 the Portuguese probably would have voted against remaining in their union with Spain. The Spanish Armada that set sail from Lisbon to invade England would never have happened.

Any further attempted takeovers by mainland Europeans are unlikely. Blighty has balls. The Little Englanders have spoken up and say they’re taking their country back.

Fantasy and fiasco to the fore. Probably plenty more to come. It’s high summer, the “silly season”. And it’s measuring up to be the silliest imaginable. 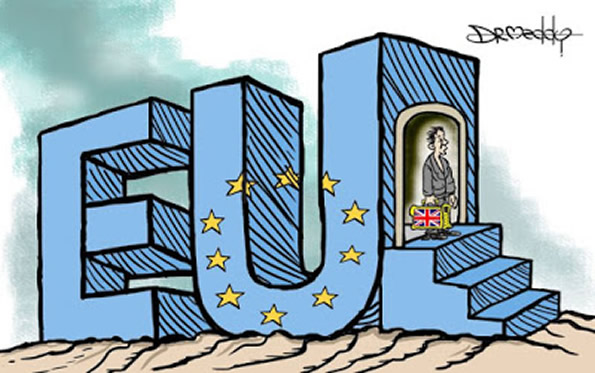