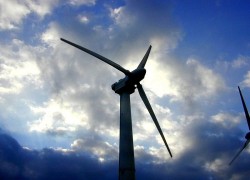 The Serra do Cume wind farm – in Terceira island – set a global record in 2010 among all wind farms equipped with the Enercon E44 900kw wind turbine.

According to regional power company-  Eletricidade dos Açores (EDA) – the 4.5MW wind farm in operation since 2008, produced 18.3 GWh in 2010. The high production was possible due to equipment that allowed the farm operating at 99 percent of the time. This accounted for 8.5 percent of total electricity generated on Terceira.

The first wind farm was established in the Azores in 1988, but the distribution of these plants covers the entire national territory – 106 wind farms and 703 wind turbines. Geothermal energy operations operate in São Miguel, Terceira, Faial, Pico, São Jorge, Graciosa, Flores and Corvo.

Portugal leads many countries in valuable renewable sources for electricity production. Renewable energy in Portugal was the source for 45 percent of the country’s electricity generated in 2010 – an increase of 28 percent in 5 years.