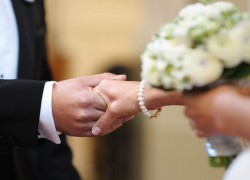 Portuguese citizens and Brazilian residents in Portugal can expedite a marriage or divorce process through a service offered online.

Applicants are able to initiate the marriage or divorce process by logging onto the Civil Online website which allows for data to be entered into required fields and fees to be payed with a credit card.

Upon completion of the process, applicants are notified that they may proceed with the civil or religious wedding ceremony.

To access the service, applicants must be 18 years old or older and must hold a citizen identification card. The average age of marriage in Portugal is 27.5 for men and 25.7 for women.

Since its creation in 2009, the Civil Online website has finalized 172 applications which resulted in actual marriages.

According to the 2011 census, 300 thousand people in Portugal were living in a common law marriage arrangement.  The total population of Portugal is estimated at 10,560,000.