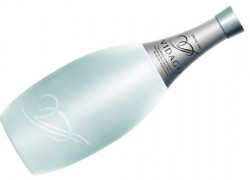 Promoted by British magazine FoodBev, the prize was announced at the gala dinner of the 8th Global Bottled Water Congress, in Rio de Janeiro, organized by Zenith International.

The new bottle presents itself in simple and very elegant lines, associated to the naturalness and purity of water, and was conceived to give a luxurious touch to any table.

Eighty brands, from 25 different countries, took part in the Water Innovation Awards 2011, competing for a total of 13 prizes in 11 categories.

The other two finalists for best new bottle in glass were Spadel, from Belgium, for its BRU glass bottle and Krusmølle Kilde, from Denmark, for its Krusmølle Kilde bottle.

Associated with its famous Vidago Palace Spa Hotel, Vidago is a town in the northern region of mainland Portugal, famous for its mineral waters. Vidago is 100% natural and pure carbonated mineral water known to be effective in the treatment of digestive problems. Vidago water, bottled since 1873, has won several national and international awards.