• Today my subject is mainly the Inquisition in Portugal and the important contribution of Alexandre Herculano (1810-1877) a star historian of this nation lamentably almost forgotten.

Uncle Tom, the main character in Harriet Beecher Stowe´s bestseller, Uncle Tom´s Cabin, published in 1852, was a fictional Negro slave in America. He appears in a footnote in Alexandre Herculano’s three-volume History of the Origin and Establishment of the Inquisition in Portugal (1854-1859). I read it in its 13th edition Portuguese version. There is an English translation from the 1920s. But what is the meaning of Herculano’s footnote?

Alexandre Herculano is first remembered as a romantic novelist. He is less known, except to scholars and historians, for his ground-breaking role as an historian, and not just any kind of historian. Among students in the humanities, he is known as the father of Portuguese historiography who recreated the events surrounding the dark days of the Inquisition in Portugal (1536-1821).

He wrote from the view-point of his own times, that is, not from the perspective of those who ruled during the Inquisition period. He called the shots, namely the Kings and the Church of Rome. Luckily for him and us, these authorities kept fairly complete records in those days, and probably had no idea that they would be searched out, dusted off, and closely perused. They are what we call today primary sources in their own hands and outlook.

The surprising, almost shocking but pleasing impression we receive after reading Herculano’s History, is that we find he is even-handed in his dealings with the victims of the Inquisition, especially the Jewish people, the Muslims and other innocents, while at the same time being very harsh on the Royalty, the Church and the Pope.

As is well-known, whoever takes up the cause of underdogs and the victims, and does it from a new viewpoint, runs a personal risk. Dissidents are rarely tolerated and Herculano was hassled and reprimanded by the clergy for not admitting certain miracles, and for his scientific history writing.

In a footnote in his History, Herculano makes a reference to Harriet Beecher Stowe´s Uncle Tom´s Cabin. It is interesting that Herculano came across this book at all in Portugal, and that he probably read it in English, even though the book was widely translated. Herculano said in the footnote:

Several years ago an admiral book agitated our spirits, describing the existence of a slave in the United States. The repugnant and painful scenes described in that famous book could have been transferred to our country in the middle of the XVI century, simply changing the names and the places, but perhaps with even more vivid colors. The life of slaves, if we are to believe the accounts of the historians of the Council of Trent at that time were truly horrible in Portugal.

While concentrating on other main topics, Herculano was referring here to the numerous slaves in Portugal at the time by not sparing sordid detail in his accounts of the inhuman and cruel treatment of Jews, the corruption in the Portuguese national life, and Church’ struggle for power, wealth and dominance over the Government, the Inquisition, and the Pope.

Uncle Tom´s Cabin is also full of details. It became famous the world over for its anti-slavery approach, and sympathy to the Negro’s plight. Yet, Herculano’s defense of the Portuguese Jews was not to have such a wide impact, and that is sad. If Portugal is known for its history at this time, it is as a “Black Legend,” for the abuses of the Inquisition, as Spain was also known for its inhuman treatment of Indians in the New World (Leyenda Negra). This is all “ancient history,” as it were, but needs to be remembered and aired.

The treatment of the Jews in Portugal, even before and after the official dates of the establishment of the Inquisition, make what is known as the Nazi Holocaust seems like a small matter.

Herculano couldn’t use the term “pogrom” because it was coined after his time, but a recent history of Portugal called the Jewish situation in Portugal a pogrom [organized hostility to helpless people, from a Russian term of late 19th century], similar to the picture painted in Fiddler on the Roof. One passage by Herculano reads:

One of the most curious things found in the documents of those times, relative to the establishment of the Inquisition, is the variety of insults vomited against Mosaic Law, a religion established by God and sanctified in the divine pages of the Bible, yet repealed later by Christianity. Accusations such as liar, ungodly, false, blasphemous are some of the softer terms used. Such was the blind furor of fanaticism and shameless hypocrisy.

Even the number of so-called heretics burnt at the stake in public ceremony seems insignificant (I will not go into the disputed numbers given by different researchers) in the face of centuries of torture, imprisonment, untold extortion and “dues paying,” which, to a large extent, supported not only the clergy, kings, the papacy and his legates, lobbies at the Vatican, and much to my surprise, also the partial construction of St. Peters in Rome, as reported more than once by Herculano.

Herculano also refers to the Jews in various ways: as a race, as a nation, and as those who follow the Law of Moses. It usually strikes foreigners how both the Spanish and the Portuguese often refer to the Jews as a race, and to the fact that a Portuguese national holiday used to be called Dia da Raça. Neither the Portuguese nor the Jews are a race, they are peoples with a rich mixture of those with whom they mingled over many centuries. So, what is in the choice of a word? A lot.

Herculano lived in anti-Semitic times and in spite of his liberalism and open-mindedness, he would occasionally use race. It is also interesting to mention here that we in the West today refer to our common heritage as the Judaic-Christian Heritage, and that the Semitic peoples are both Arabs and Jews, deriving from the Bible itself.

In Herculano’s approach to this historical period, it was, once again, a pleasant surprise to see him talk about the dotes ingénitos (spelled that way in his time) of the Jews (inherent virtues). He was not only original, he was daring.

While the comparison between those times and the Portugal of today is not exact, there are many situations that merit a closer look. Hunger and bankruptcy were prevalent in those days, further exacerbated by the existence of the plague occasionally, also as reported by Herculano.

Just like present-day Portugal, many foodstuffs had to be imported, for example, wheat from Sicily. Kings had to levy taxes, issue bonds and “request voluntary contributions” in order for government to survive and run, which almost always accumulated enormous debts.

Comparisons are odious and are not always fair, but in Portugal as well as in almost any other country, it is necessary to come to grips with the past to learn from it. In another long quote Herculano wrote:

Luxury was unbridled. The government (Corte) was filled with indolent people, the Casa Real gave the example of lack of order and economy. In noble homes there was an overabundance of servants (criados) that surpassed the master’s capacity to maintain, and causing a lack of a labor force for general work and agriculture. Trips by the kings were a veritable calamity for the average man in the street. Immense committees of parasites of all kinds devoured the possessions of owners and workers. Maintenance, mounted processions, carriages, all this was not paid for, or paid for with the issue of debt certificates, frivolous outings that often destroyed plantations, farms, and the countryside.

In other words, certain measures were then as they are now threatening to bring the country down as Herculano continues writing: 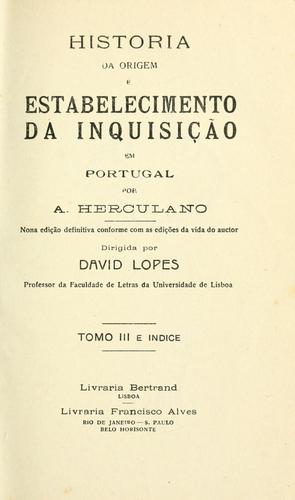 Already in 1543, foreign debt was about equal to the public debt. The interest rate was exorbitant and exceeded the ability to balance the budget. The Portuguese Factor in Flanders earned 25% a year which caused the debt to double every four years, forcing the King [often] to tax the regions. These matters even before 1542 caused even wise and experienced people to despair. Never in the matters of Man had public finances been in such profound disorganization.

One of the ironies that resulted from this whole situation, and which I can only summarize briefly here, is that many Jews who were able to escape the clutches of the authorities and emigrate, paying a price for this in loss of their possessions and money, plus payments to the government, settled in diverse countries where they were welcomed in places such as Flanders, Italy, France, Syria, Turkey, and many other countries. As Herculano reported, “Today those who leave Portugal are welcomed in many Christian countries in good will, and are protected with specific privileges.”

Those who left continued to be international commercial agents dominating the economic trade at home and in the colonies, for example Goa, where they were instrumental in the spice trade.

Uncle Tom´s Cabin was written after the passage in the United States of the Fugitive Slave Act of 1850 in an attempt to help runaway slaves. The novel was for emancipation, and to demonstrate the incompatibility of something as base as the slavery by man of man, in the light of Christian values. What Harriet Beecher Stowe said about her reason for writing Uncle Tom´s Cabin, must have touched Herculano. She wrote, “I would write something that would make this whole nation feel what accursed thing slavery is.”

As we reach the end of the book, Tom’s last master whips him to death for refusing to deny his faith, and to not reveal the hiding place of two runaway women.

Alexandre Herculano in his history of the Inquisition held the same high beliefs, values and hopes, the spirit of which we feel on every page we turn and read, and which should not be forgotten.

John Howard Wolf, an American expatriate in Portugal since 1977, is a contributor to the Portuguese American Journal.