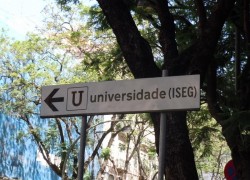 By Carolina Matos, Editor – The University of Massachusetts Dartmouth has announced a new year-round study abroad program called “UMass in Lisbon” starting during the Fall semester of 2012, in addition to its 11th Annual Summer Program in Portugal, both of which are co-sponsored by its Center for Portuguese Studies & Culture and financially supported by the Luso-American Development Foundation (FLAD).

Primarily designed for undergraduate students, the UMass in Lisbon program is scheduled to run from September 7 through December 17, 2012. A Spring semester is now scheduled for February through May 2013.

The shorter Summer Program in Portugal, taking place in Lisbon from June 9 through July 8, 2012, is a 4-week-long program started back in 2001. This program offers students the opportunity to explore the political and cultural environment of Portugal’s capital as well as guided field trips to other areas of the country. Students in this program take two UMass Dartmouth courses in the area of Political Science, taught in English by recognized experts in the field. Credits will be available both at the undergraduate or graduate levels.

The new year-round UMass in Lisbon program provides a wider array of classes to accommodate students from almost any major. Participating students will have a large number of curricular choices available to them in both English and Portuguese. The program includes UMass faculty teaching UMass courses on site, including foreign language and culture study at all levels. This is the only year-round residential study abroad program in Portugal managed and taught directly by a major US university.

In a statement to the Portuguese American Journal, Professor Michael Baum, Chairman of the UMass-Dartmouth Political Science Department, said that he looks forward to being both the academic director of the program as well as an on-site instructor during the 2012-13 academic year. He stated, “Students will find Lisbon, despite the Eurozone crisis, to be among the most dynamic, affordable and sunny European capitals in which to study and live.”

According to Professor Baum this international program will be culturally enriching and especially competitive. He said, “Our program will be particularly rich as a destination for intercultural communication. We expect to offer courses with students from around the world who will use Lisbon as a living classroom, including guided visits to museums and neighborhoods around the city, plus field trips around the country with internationally-recognized experts in their field.”

Professor Michael Baum also hopes these study abroad programs in Lisbon will make a significant dent in the yawning gap between the number of Americans who do study abroad in Spain estimated at about 24,000 a year compared to Portugal with only 240 a year.

First, he said, “Portuguese is the sixth-most-spoken language in the world and the US State Department classifies it as a strategic language for US interests, and thus we think Lisbon is the perfect cosmopolitan, safe, cultural and linguistic hub to experience the many aspects of the Lusophone world.”

Secondly, he said “Many of our Portuguese heritage students do not speak the language fluently enough (or at all) to consider study abroad in Portuguese, so our program is a hybrid design that offers UMass courses in English plus language and culture classes in Portuguese at all levels, as well as other languages.”

Moreover, said Professor Baum, “We open our classrooms to ISCTE-IUL’s Lisbon University Institute students, both foreign and Portuguese, so that our classrooms become an international experience despite being taught in English. IUL also has a significant number of classes they teach in English, which our students can take, further expanding the curricular choices each semester. We’ll complement the classroom learning with international living arrangements and quite a few field trips and study tours around the country. We think our program will be among the most economical study abroad programs in Western Europe on the market.”

Students enrolling in these programs may qualify for partial scholarships through the Luso-American Development Foundation (FLAD) in partnership with private donations. All federal and state financial aid and grants are applicable to the UMass in Lisbon program.

Administered through UMass Dartmouth’s International Programs Office(IPO), and Professional and Continuing Education both programs are sponsored in partnership with the UMass Dartmouth Center for Portuguese Studies & Culture, the Luso-American Development Foundation (FLAD), the Instituto Superior de Economia e Gestão of the Universidade Técnica de Lisbon (ISEG-UTL) and the Lisbon University Institute (ISCTE-IUL), two of Lisbon’s most well-known and highly regarded schools in the business and social sciences areas.

For more information and applications for the 2012 Summer Program >>