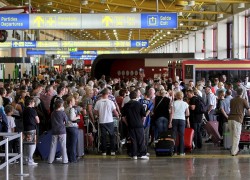 Baggage handlers union, cabin staff union and air traffic controllers unions have said they are supporting the protest against the government’s austerity measures.

Portuguese airport operator ANA said passengers expecting to fly after 10:00pm on November 23 or any time the next day should contact their airline or travel agent before heading for any of the airports in Portugal due to a national shutdown.

In October, Portugal’s two main unions, CGTP and UGT, had called for a general strike scheduled for November 24.

The shutdown is a protest against the newly proposed government austerity budget measures for 2012 and 2013 submitted to parliament by Prime Minister Passos Coelho.