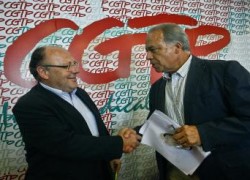 The two largest Portuguese union federations have agreed, Wednesday, to stage a general strike on November 24.

The shutdown is a protest against the newly proposed government austerity budget measures for 2012 and 2013 submitted to parliament on Monday by Prime Minister Passos Coelho.

Unionists argued that the budget cuts, proposed by the center-right government of Prime Minister Passos Coelho, will eliminate thousands of public and private jobs and will result in across-the-board tax hikes that will impoverish the country further sending Portugal into a deeper recession.

“The scale of the recession and unemployment and the injustices we are seeing justifies this strike,” said Carvalho da Silva from CGTP. “We got to fight without hesitation and got to do what is necessary,” he added.

Unemployment is currently at 12.1 percent, the highest since the 1980s, and the government expects it to rise further to 13.5 percent next year.

The CGTP and UGT had called for their first general mega-strike together in October 2010, which took place on 24 November of last year.

The prime minister had described Portugal’s current predicament as “a moment of national emergency” on a speech broadcast to the nation Thursday of last week.

On a recent speech broadcast to the nation, President Cavaco Silva had said, “The demands on the Portuguese are for them to make the biggest sacrifices that have been seen for a generation,” and he added, “Budget discipline will be tough and inevitable.”

On Wednesday he said he had “doubts” about the result of the austerity sacrifices being imposed on the population and the country as a whole and questioned whether the “limits” had not gone too far, particularly regarding pension cuts. Speaking at a congress of Portuguese economists, Cavaco Silva said “there are limits to the sacrifices.”

The President has also summoned the consultative Council of State to meet on October 25 to address Portugal’s current financial and economic crisis, it was announced Monday. The post of Portuguese President is largely ceremonial since executive power lies with the Prime Minister.