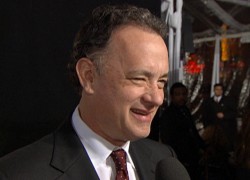 Tom Hanks has accepted the invitation to attend Yale University’s graduation ceremony as the guest speaker.

He told Oprah Winfrey that he is honored to address the Class Day celebrations scheduled for May 22, the day before Yale’s 310th commencement.

Yale guest speakers traditionally appear on Class Day instead of the actual graduation.

Tom Hanks has won Academy Awards for performances in the movies “Philadelphia” and “Forrest Gump,” and also starred in “Apollo 13” and “Saving Private Ryan.”

Tom Hanks was born in Contra Costa, California, in 1956, of parents of Portuguese, British and Irish descent. His maternal ancestors were Portuguese pioneers in California with roots in the Azores.  Some of Tom Hanks’ ancestral family names include the Portuguese surnames Enos, Rosa, Borges, Fraga, and Silveira.