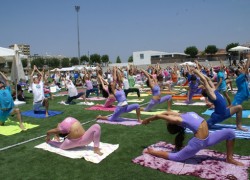 Thousands are expected to participate in a Mega Yoga Class to be held Sunday, June 26, at Estádio 1º de Maio, in Lisbon, to celebrate Yoga’s World Day.

The event  will gather Yoga practitioners, sympathizers and curious  and representatives from the most renowned Yoga schools in Portugal and the world.

In a statement to LUSA News Agency, Jorge Castro and Veiga, the president of the Portuguese Yoga Confederation, said the objective of the celebration was “to remind humankind that our planet is one, that the human race is one, and that globalization should promote harmony and solve conflicts with humanity and diplomacy, not war.”

This year, Portuguese architect Siza Vieira will be awarded the Sergio Vieira de Mello Award by the Yoga Portuguese Confederation.  Every year, the award distinguishes the work done by an individual on behalf of global fairness, inter-ethnic equality and world solidarity.

The Portuguese Yoga Confederation teaches Yoga in more than a thousand Yoga centers in 50 cities nationwide in Portugal. Founder and mentor Jorge Veiga e Castro is one of the living Yoga Masters most renowned worldwide.

Celebrated since 2001, Yoga’s World Day is a candidate for First World Holiday at the United Nations and UNESCO.