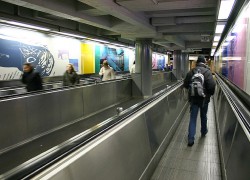 More than 23, 700 Portuguese emigrated last year, reported Wednesday Lisbon based Diário Económico.   It is the second largest emigration wave since the beginning of the millennium, only surpassed by the 26,800 emigrants registered in 2007.

Many are young professionals with college degrees trying to escape the economic debacle. Portugal’s National Statistics Institute (INE) says the country has slipped into a double-dip recession.

The scope of the new wave of emigration is difficult to measure, but various estimates put the numbers at between 50,000 and 100,000 departures per year, returning to the levels of the 1960s.

The majority have settled in neighboring European countries, but many have moved to the former Portuguese colonies of Angola, Mozambique and Brazil — all listed among the fastest-growing economies in the world.

With a booming economy, oil-and-diamond rich Angola is recruiting civil engineers and architects, to meet the demand of major public-works projects after a three-decade civil war. According to new estimates, the former Portuguese colony is now home to over 90,000 Portuguese citizens.

Recent figures from  INE have revealed that over 610,000 are unemployed of which 95,400 are under the age of 25.  With an unemployment rate at 12.4 percent, the unemployment among college graduates is over 16 percent with more than 64,000 out of work.  The total population of the country is at 10,636.979, according to figures released Wednesday by the INE.

Immigrant workers in Portugal are also among those hard hit by unemployment and some are seeking help to return to their homelands.  Still, according to the INE,  27,575 immigrants entered Portugal in 2010 — the lowest immigrant flow of the last decade.