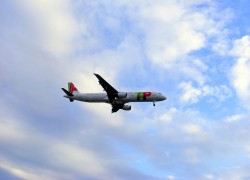 After an engine failure, a  TAP Air Portugal Airbus A320-200 made an emergency landing, on Thursday, without problems, at the International Lajes Airport, Terceira, Azores.

The aircraft, with 80 passengers on board, was en route to Lisbon — flight TP-1828 — when the incident occurred 10 minutes after takeoff.  The crew subsequently shut the engine down and returned to Lajes for a safe landing.

Passengers deboarding the aircraft said they heard a loud bang in the cabin, but that they didn’t feel any turbulence. The faulty engine did not burn, nor spilled oil or fuel, witnesses said. The causes for engine failure are under investigation.

On April 1, a TAP Air Portugal aircraft made an emergency landing in Salvador, Brazil, just two hours after takeoff from Rio de Janeiro. TAP issued a statement alleging that a “technical problem” in one of the engines of the Airbus A330 forced the jet carrying 229 passengers to land.

At the time, a passenger reported that there was smoke in the cabin. Other passengers tweeted about smoke, burning smell and failed lights in the cabin after a sound like an explosion.

According to the JACDEC Airliner Safety Report released in January 2011, TAP Portugal was rated Western Europe’s safest airline and tied for fourth worldwide with three other airlines (Qantas, Air New Zealand, and Finnair).