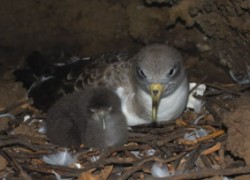 Every year the population of the Azores participates in the “SOS Cagarro” initiative a program aimed to preserve the Cory’s Shearwaters species which nests in the Azores.

“Cagarro” is the Portuguese name for the Cory’s Shearwaters (Calonectris diomedea) a bird of the albatross family named after the American ornithologist Charles B. Cory.

The program, which runs from October first to the end of November, involves the population on the nine islands, by alerting the population to rescue young birds of the species that fall from nests.

This year it is estimated that 3.233 birds were rescued in the Azores. A total of 169 organizations and 4.706 volunteers were involved in the rescue program.

The event is celebrated across the archipelago with several educational activities. Schools receive “SOS Cagarro” kits and nature watchers teach children how to handle the birds.

The Cory’s Shearwaters spends most of its life at sea but comes ashore to breed in late summer. November coincides with the departure of young Cory’s Shearwaters from their nests to their first transoceanic flight. Most birds migrate into the Atlantic as far north as the south-western coasts of Great Britain and Ireland.