SATA and US Airways team to offer new gateways – Travel 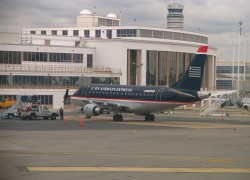 Following a recent agreement between SATA Air Azores and US Airways, travelers using SATA Air Azores can now purchase e-tickets to and from the Azores to new destinations within the United States including Chicago, Fort Lauderdale, Miami, Philadelphia, Orlando and San Francisco and New York.

The partnership between SATA Air Azores and US Airways is part of SATA’s strategy to expand into the North American market where the Azorean airline has increased its traffic by 31.4 percent in 2010, compared to the previous year.

The new service will offer convenience to travelers on both sides of the Atlantic by allowing customers to travel on one single e-ticket with through check-in service.

SATA Air Azores and US Airways customers will be able to check their bags to their final destination and receive boarding cards for both carriers upon check-in with either US Airways within the United States or with SATA in the Azores and/or mainland Portugal.