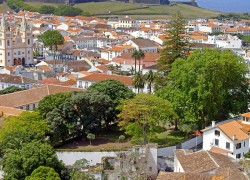 The Sanjoaninas Feast, honoring Saint John, will take place from June 17 to June 26, in Angra do Heroismo, Terceira, Azores. The name Sanjoaninas comes from the name São João (St. John) the patron saint of the island.

The festivities evolved over the years to become a combination of religious celebrations and secular traditions. They take several days of religious, cultural, recreational, ethnographic and sports activities, attracting thousands of visitors.

This is highest tourism season for Terceira, when many immigrants return to the island to celebrate the festivities with relatives and friends. The entire population of the island participates actively in the Sanjoaninas festivities.

The program opens with the “Queen” parade and includes Portuguese style arena bullfighting and typical Terceira touradas à corda — rope bullfights — a local custom similar to the Spanish “running of the bulls.”

The Sanjoaninas Festival, the biggest popular celebrations in the Azores, date back to the sixteenth century and showcase Terceira’s heritage, culture and way of life.

Terceira is the second most populated (55,000) and third largest Azorean island. In 1983, Angra do Heroismo became a UNESCO World Heritage Site for its well preserved 16th century Portuguese colonial architecture and historic monuments.