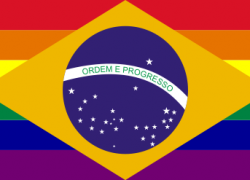 Brazil’s Supreme Court has ruled Thursday that civil unions between same-sex couples are now allowed. Although the ruling recognizes homosexual partnerships it does not go so far as to make marriage equal in the nation. The court decision was approved 10-0 with one abstention.

According to the ruling, from now on lesbian and gay couples in Brazil have the same legal rights as heterosexual couples when it comes to alimony, retirement benefits of a partner who dies, inheritance, and other marital rights such as the right to adopt children.

With the ruling, Brazil became the third South American country, after Argentina and Mexico, to allow same-sex partnerships.  Brazil, with the world’s largest Roman Catholic population, has an estimated 60,000 gay couples,  in a population estimated at 203,429,773 (2011).

A step ahead of Brazil on the issue of gay rights, Portugal is among the first 10 counties in the world to allow same-sex marriage. Portuguese president Aníbal Cavaco Silva signed the law authorizing gay marriages on May 17, 2010, making Portugal the sixth country in Europe to allow same-sex unions.