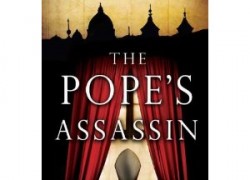 A recipe for a best-selling, Luis Rocha’s debut novel in the United States “The Pope’s Assassin” (G.P. Putnam’s Sons) is loaded with action.

The plot tells about a struggle between the Vatican and the Jesuit Order with priests killing and being murdered for trying to access old artifacts and secrets.

When the killing begins, Rocha keeps the action moving after an ancient scroll is found in Turkey dating back to A.D. 325.  He then adds a romantic liaison to the mix entanggling rugged Father Rafael and British journalist Sarah Monteiro, who cannot seem to get the lethal priest off her mind.

For the Dan Brown, “Angels and Demons” and “The DaVinci Code” crowd, this is a similar book with the same intricacies of Church politics in action, mysteries unfolding and enough conspiracies to keep the reader engrossed.

The Pope’s Assassin is available both in  print and ebook format, including a kindle edition.

Rocha’s books have been published in more than 30 countries. Born in 1976, Rocha has published five novels in Portuguese.  He previously worked for several years in London as a television writer and producer.