Ricardo Rebelo “Islands of My Dreams” on PBS – People 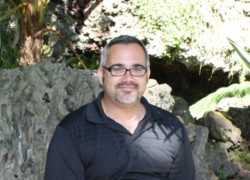 He was educated at Saint Anne’s School and attended Durfee High School, before joining the Navy in 1993.  Later he enrolled at Bristol Community College and then Rhode Island College where he received a Bachelors and Masters in Media Studies.

Ricardo has worked in television and film for over 20 years and has won several local and  national awards for film and video production, namely the Rhode Island International Film Festival/Best New England Film (2010); The Alliance for Community Media (2010); Best Documentary (2005); Best Short (2005); Best Entertainment (2006); and Best Comedy (2000).
His most recent documentary — “Islands of My Dreams” — about the Azorean immigration experience to the United States, is scheduled to air on Rhode Island PBS on May 21st, at 7pm and May 29, at 11pm.2011.(*)

Ricardo chose this topic because he wanted to better understand why his family immigrated to the US and what their lives were like before and after they immigrated.  He said “It was a very personal experience for me to look at my heritage.  I learned more about the amount of poverty and hardship they went through by talking with other people who went through the same experience.”

For most immigrants the circumstances of their experience don’t seem to be particularly relevant or remarkable.  But for Ricardo they were.  About his own family, he said, “We came to the US because my sister was very sick and my parents felt that they could get better medical help in America.”

The film focuses particularly on the two most recent waves of immigration from the Azores to the United States in the 50s and the 70s, during the Salazar regime, before the 1974 April Revolution.  He said, “I found out how it was like for them growing up under the dictatorship, and why it was so important for them to leave. It was not just the hardship they experienced.  It was the combination of hardship and political oppression.”

Ricardo also explored how this particular immigrant group was able to maintain the culture of their homeland here, while back in the Azores the cultural environment has changed remarkably since the 1974 April Revolution.  He said, “The Azorean culture in America is not the same as in the Azores they left behind.  They created here a hybrid culture with elements from the old Azorean culture and the American way of life.  They do things here that people over there don’t do any longer.”

It took Ricardo two years to produce “Islands of My Dream” for PBS.  He interviewed 32 people in the New England area and filmed in New England and in São Miguel, Azores, where his family is originally from.

For Ricardo, filming has always been a primary interest.  He recalled, “My uncle Jorge purchased a VHS camera in 1986 and I began shooting short films with my friends.”  Then, he said, “I have worked in television since 1992 and directed hundreds of TV programs, most of them for the Portuguese Channel in New Bedford.  I began working on features in 2005.”

The Luso-Centro, based at the Bristol Community College, in Fall River, is the main sponsor of “The Islands of My Dreams.” Other sponsors include the Luso-American Development Foundation (FLAD), based in Lisbon, Portugal, the University of the Azores, based in Ponta Delgada, São Miguel, and the Community Television of Fall River.  All interviews, even those that don’t make it into the documentary, will be archived at the Luso-Centro at BCC.

Ricardo is a former Navy Public Affairs Reporter and was a production assistant for the ABC national television network.  While in the Navy (1996) he worked as an international liaison with CNN, NBC and ABC television and during this time also produced an episode of “Home Improvement” with Tim Allen.  Currently Ricardo is an Instructor of Film, Video, Mass Communication and Digital Film Making at Bristol Community College, in Fall River.  He lectured at Rhode Island School of Design and at Johnson & Wales in Providence, Rhode Island.  His documentary about Lizzie Borden was featured in Rhode Island PBS in October 2010.  He was a Director at the Rhode Island International Film Festival and News Director for the Portuguese Channel as well as the Executive Director of Old Rochester Community Television.  He has worked as a cinematographer for the last three years shooting several films including “Spatter Disco” and “Beyond the Duncwich Horror.”  He has plans to produce a film on a short story by Stephen King.  It is a sequel to the vampire novel “Salem’s Lot.”

(*) Check your local PBS station for broadcast dates and times. The contract with PBS gives them non-exclusive rights for 4 years.  This means PBS may continue to air the film at any time through 2015.