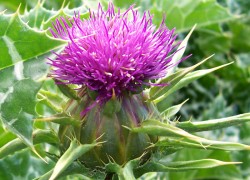 The thistle, a plant used in the manufacture of cheese, has potential anti-tumor properties that could prevent and treat two types of cancer, breast and liver cancer, two uncommon but often fatal forms of cancer, Portuguese researchers have claimed.

The claim is based on research using potential anti-tumor thistle leaf extract by researchers at CEBAL — the Center for Agricultural Biotechnology and Agricultural Science — based in Beja, Portugal.

Since 2008, that a team of CEBAL researchers, led by Fatima Duarte, has been studying the potential of the thistle to prevent and treat diseases, including cancer.

Previous studies and folk medicine had suggested that the use of milk thistle in potions and infusions could treat digestive problems, indicating that the plant “may have some very interesting attributes” at the phytotherapeutic level (use of natural compounds to prevent and treat diseases), said Fatima Duarte.

After dividing the thistle in parts, each one for its natural extract, the CEBAL researchers have concluded that the leaf extract “seems to be more active, or has the most phytotherapeutic potential.”

“Right now, I can’t say that the leaf extract can be an effective treatment,” but, through testing in vitro, using a triple negative phenotype model of a type of breast cancer, research has shown that “it can block the growth of tumor cells” when they are incubated with the leaf extract of the thistle, she said.

Milk Thistle, Cardo-de-Santa-Maria or Cardo Mariano, (Silybum Marianum) is an annual or biannual plant of the Asteraceae family. The plant, originally a native of Southern Europe through to Asia, is very common in Portugal where it is used to curdle milk for cheese making and in folk medicine and herbalism to treat various ailments. It has been suggested that Milk Thistel extract has antifungal effects and may be as effective as fluoxetine in treatment of obsessive-compulsive disorder. The extract is also used in beverages as an energy enhancing agent.