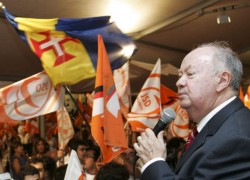 Alberto João Jardim, the President of the Regional Government of Madeira, is the projected winner for the regional legislative elections scheduled for October 9.

Jardim, who is the leader of the Social Democratic Party (PSD) in the Region, is expected to win with absolute majority (50,5%), new polls by Eurosondagem have revealed. This is the 9th time he is running for the post.

Jardim, who has ruled Madeira since 1978, is campaigning under the accusation of having mishandled Madeira’s debt now estimated at 5 million-euros (6.7 USD billion).

Madeira (population 253,000) became an autonomous region of Portugal in 1976 with its own government and autonomous legislature. The Regional Government includes the Legislative Assembly, elected by universal suffrage for a four-year term; the Regional Government and Presidency, with parliamentary legitimacy, composed of a President, a Vice-President and seven Regional Secretaries, responsible for day-to-day executive operations.

The Autonomous Region of Madeira, composed of Madeira and Porto Santo islands,  is represented in the Council of Ministers of the Central Government by a representative appointed by the President of Portugal.