Protest: Train engineers on strike over the holidays – Portugal 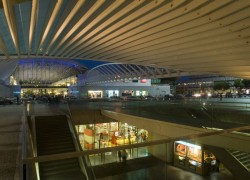 The Portuguese Train Engineers’ Union called a four-day strike over the holiday weekend cancelling most national rail services over December 23-25 and January 1. The strike also called for an overtime boycott by engineers from December 23 through the end of January.

The stoppage went ahead after last-minute talks with the state run Comboios de Portugal (CP) railways administration failed late Thursday, resulting in abrupt train cancellations at the evening rush hour through the holiday weekend, leaving thousands of commuters stranded. On Friday, only about 20 percent of regular trains were running.

According to the Train Engineers’ Union the four day strike and overtime boycott was called to protest what was described as the “illegal disciplinary” action against engineers refusing to double as ticket collectors.

The union also said members were fighting public sector pay cuts and tax hikes that are part of a national austerity program being implemented by the government.

The measures being enacted by the government are in response to the emergency 78 billion-euro ($102 USD billion) international bailout that Portugal negotiated earlier this year with its European partners.

Thousands of low income Portuguese workers, who live and work in the major urban centers, rely on train transportation to commute to work and to go back home to their villages and towns to spend the holidays with extended family.