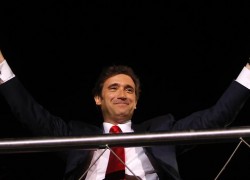 As he was sworn, he said, “Portugal won’t fail,”  and he added, “We can’t ignore the scope and urgency of the challenges ahead, but we won’t fear.”

The new government is formed by a total of 11 ministries, 5 less than outgoing Socialist Party (PS) government. The 11 ministries are shared between the two coalition parties in government.

The Social Democrats (PSD), who won the June 5 elections, have four ministries, while their coalition partner, the Christian Democrats (CDS-PP) have three ministries. There are four independent ministries.

The new appointed Finance Minister, Vitor Gaspar, is scheduled to meet Tuesday with representatives from the International Monetary Fund, European Central Bank and European Commission, to deliberate over  Portugal’s compliance with the financial bailout worth 78 billion-euro ($114 USD billion).

The new coalition government will implement 13 austerity measures, out of a total of 209 austerity measures, no later than the end of July, which includes across-the-board tax hikes, steep spending cuts and structural reforms. The measures are a condition to meet the terms of the bailout loan.