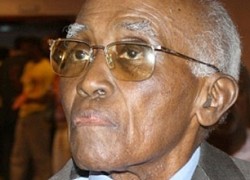 The body of Aristides Pereira, Cape Verde’s first-ever president, has now arrived in the West African country following his death at age 87 in Portugal last week.

There was a large crowd in attendance at the airport, including former president Pedro Pires, members of the government, the military, family and friends.

The state funeral of Aristides Pereira takes place in the capital, Cidade da Praia, Tuesday, before a private ceremony lays him to rest in his place of birth, Fundo Figueiras, in the north of Boavista island.

The Cape Verde government has granted a public holiday to allow mourners to pay their last respects.

Aristides Pereira, who fought Portugal’s colonial rule in the Cape Verde Islands and became the West African country’s first post-independence president, died September 22, at Portugal’s Coimbra University Hospital where he had been since August.

On August 2, Aristides Pereira was flown to Lisbon, Portugal for treatment after having suffered a fall and fractured his femur at his residence in Praia.

He had become head of state after Cape Verde won independence from Portugal in 1975, ruling the country autocratically as a Marxist one-party state, until 1991 when he lost the country’s first democratic elections.

President Aristides Pereira was a co-founder of the African Party for the Independence of Guinea and Cape Verde (PAIGC) in 1956. Cape Verde is one of Portugal’s five former African colonies. The island’s international airport would be renamed in honor of Aristides Pereira.