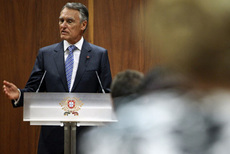 The President of Portugal, Aníbal Cavaco Silva, will visit Washington on November 12, where he will be a guest at the Portuguese American Leadership Council (PALCUS), to participate in the 15th PALCUS Annual Gala and the 20th anniversary celebration of the organization.

Prior to the Gala, President Cavaco Silva will attend a meeting of Portuguese-American elected officials hosted by the Portuguese Embassy in Washington, DC.

At the event,  PALCUS will honor one organization and four individuals in recognition for their accomplishments and services on behalf of the Portuguese community.

U.S. Ambassador to Portugal Allan J. Katz and Ambassador of Portugal to the United States Nuno Brito will attend the event.

While in Washington, President Cavaco Silva will hold meetings with Portuguese representatives at the International Monetary Fund, the World Bank and the Interamerican Development Bank and heads of US based think-tanks. He will also  visit the National Gallery before presiding at the II Convention of Portuguese-American Elected Officials to be held at the Portuguese Embassy.