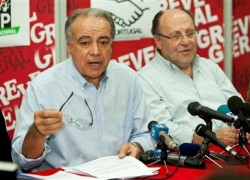 The two largest Portuguese union federations have agreed Monday to call for a general strike for a date to be announced “very soon,” their leaders said.

The announcement was made by CGTP leader Carvalho da Silva at the end of a meeting with João Proença the leader of UGT. They didn’t advance a concrete date for the shutdown but said they would decide on the date on Wednesday.

The CGTP and UGT had called for their first general mega-strike together in October 2010, which took place on 24 November last year.

The shutdown is a protest against the newly proposed government austerity budget measures for 2012 submitted to parliament on Monday by Prime Minister Passos Coelho.

The prime minister had described Portugal’s current predicament as “a moment of national emergency” on a speech broadcast to the nation Thursday of last week.