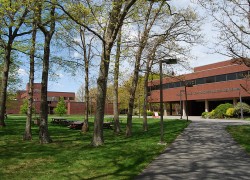 The Luso-Centro, at Bristol Community College, is organizing the “Portuguese Language Day” to be held on May 5, from 9:30 to 1:00pm, at the Jackson Arts Center, 777 Elsbree Street, Fall River (MA).

The program will begin with a presentation of a documentary produced by Ricardo Rebelo, Instructor of Communication at BCC. His presentation, entitled, “How They Lived: Life in the Azores Prior to the Revolution,” will focus on interviews with Azorean immigrants discussing the difficulties of living under the Estado Novo regime (1937-1974).

Ricardo Rebelo conducted these interviews in the United States, Canada, and the Azores. The presentation will feature segments of a larger documentary film created by Ricardo Rebelo entitled, “Island of My Dreams,”  to be aired on Rhode Island Public Televison, on May, 2011.

The project was co-sponsored by the Luso-American Foundation for Development (FLAD), based in Lisbon, Portugal, and Bristol Community College.

A concert by ROCK 4 U will follow.  The band is comprised of a group of Azorean musicians from the Island of Faial, who specialize in pop rock and blues in both English and Portuguese.

Delicious Portuguese sweets “Malassadas e Biscoitos” will be served as a gift from Açores Bakery and Benvinda Costa-Reedy, a student from BCC Intermediate Portuguese class.