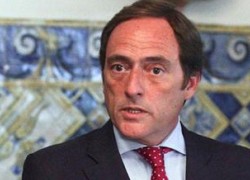 The Portuguese top diplomat praised Jalil for respecting the contracts underway between the Libyan government and the Portuguese companies operating in the country.

In a joint statement to the press, Paulo Portas said, “I urge the Portuguese business leaders to go back to Libya, a land of opportunity.”

On July 28, Portugal recognized the NTC as the legitimate representative of the Libyan people. “Portugal supports the Libyan people’s aspirations in the construction of a free and democratic society,” said a Foreign Ministry statement.

Nearly 60 countries have recognized Libya’s National Transitional Council, including the United States. China has not formally recognized the NTC, while Russia has said Moscow will recognize the new leadership under the condition they “unite the country for a new democratic start.”