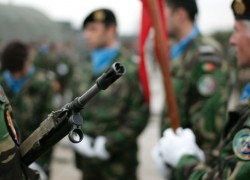 Demonstrations by Portuguese civil servants and the military are set to take place in Lisbon on Saturday to protest over the severe austerity measures proposed by the government for 2012. Police officers were expected to join the military demonstration projected to gather thousands of protesters.

Earlier this week, retired Col. Otelo Saraiva de Carvalho, a leader of the democracy-restoring 1974 “Carnation Revolution”, told Lusa news that a growing dissatisfaction with the government could trigger a military revolt.

Speaking in Parliament this week, before the Defense Commission, General José Luís Pinto Ramalho, the Portuguese Army’s chief of staff, also voiced his concerns over the government harsh measures telling lawmakers the military were “feeling the same as people across the country.” The budget proposal for next year foresees a 3.9% reduction in defense spending.

In a statement to the press, Gen. Ramalho reassured reporters the military associations, calling the Saturday demonstrations, would behave within “the limits of the law,” and that the Armed Forces were functioning in a “cohesive and disciplined manner.”

The three branches of the Armed Forces were expected to join the rally scheduled for 3pm, local time, at Rossio, downtown Lisbon, a military source said. The source told journalists that military institutions in Portugal have never experienced “such a time of hardship.”

Demonstrations by military Saturday center primarily on the recent freeze in promotions and new recruitment and cuts in salaries and benefits as part of the government’s austerity bailout policies.

In a separate demonstration, thousands of Portuguese civil servants are also expected to rally Saturday, marching down Avenida da Liberdade, in Lisbon, to voice their protest over cuts in salaries and vacation subsidies.

Last week public transportation services were severely disrupted across Portugal while Portugal’s two main unions have called for a general strike for November 24.

A preliminary government proposal for the 2012 budget was approved in Parliament Friday with votes from the center-right PSD/CDS-PP majority governing coalition. The Socialists (PS), ousted from power last June, abstained, while the extreme left (PCP, BE and ENP) voted against.

The budget proposed reflects the austerity measures imposed last May by the 78 billion-euro financial loan negotiated with Brussels and the International Monetary Fund, aimed at slashing Portugal’s deficit to 4.6% next year.

Portugal slipped into a double-dip recession this year. The economy is forecast to keep contracting in 2012 when the official unemployment rate is predicted to reach a record 13.4 per cent.