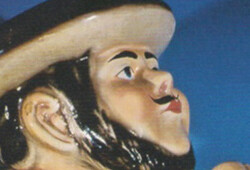 An email chain message with the representation of “Zé Povinho” (Portuguese for “John Doe”) has been automatically forwarded to Moody’s, Tuesday, reported LUSA news agency.

The message coincides with the launching in Portugal of a new series of reproductions of the historic “Zé Povinho” figurine created by Portuguese ceramist Rafael Bordalo Pinheiro in 1875.

The popular figurine comes with the traditional “manguito” gesture, but now with the message “Toma Moody’s!” (For you Moody’s!) inscribed on the base.

The figurines are being reproduced by Visabeira, the ceramist company that holds the rights to Bordalo Pinheiro’s creations.

Each piece of pottery is displayed in a box of its own and has a postcard addressed to the rating agency, which can be sent with a personalized message.

The email version of the comic relief piece displays a “Zé Povinho” doing his “manguito” and a featured button to forward the message directly to Moody’s headquarters in New York.

Nuno Barra, marketing director of Visabeira, believes the “email” will have a viral effect. He also hopes the figurine sales will help boost the company’s revenue and also promote the cultural heritage of Bordalo Pinheiro.

The decision by Moody’s, in early July, to downgrade Portugal’s sovereign debt to “junk status” has angered many Portuguese who are mobilizing to protest against the rating agency. Since then, a number of Facebook pages were created urging users to intervene in creative ways.

Zé Povinho, created in 1875 by Rafael Bordalo Pinheiro, became the symbol of the Portuguese working class. “Zé” is the short form for “José” one of the most common Portuguese first names and “Povinho” is the diminutive for “people” or “little people.”

Rafael Bordalo Pinheiro,  a famous 19th century Portuguese caricaturist and ceramist used the “Zé Povinho” caricature for over 30 years, until his death, publishing it in the most popular magazines and newspapers of his time. He also created the allegoric “manguito” figurine which to this day personifies the Portuguese people.