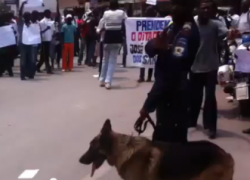 The Portuguese news agency Lusa reported that protesters were pushed back by the police when they planned to march from Luanda’s Santana Cemetery to Independence Square. No arrests were made.

Previous protests in Luanda, on September 3, led to dozens of arrests followed by summary trials that handed down prison terms of between 45 and 90 days.

Protesters Sunday demanded the release of 18 arrested and sentenced to up to three months, following the September 3 demonstrations, which resulted in violent clashes with the police, with injuries suffered by protesters, police officers and journalists.

Mfuca Muzemba general secretary of JURA (young people’s revolutionary movement), the young people’s organization of Angola’s opposition party UNITA, told Lusa his organization would not sit back or keep quite when faced with injustice in the country.

Muzemba, who was arrested on September 8, following the September 3 demonstration, was among the tried and released.

Speaking at a press conference early in the week, JURA’s leader said demonstrations had been held all over the country, especially in Luanda, because of Angolans’ dissatisfaction with “injustice, intolerance, corruption and bad governance.”

Talking about his imprisonment, Muzemba said he was kept in “sub-human conditions” and suffered “psychological pressure” for demonstrating his solidarity with other young people.

Carlos Silva, an Angolan student who intended to take part in the demonstration in Luanda this weekend, said that young people were “wary” but knew their cause was “fair”. He said “our demands are the same as before… but we hope for a much bigger turn out.”

Political tension is rising in Angola ahead of elections planned for next year. Inspired by uprisings which toppled rulers in Egypt and Tunisia, Angola’s youth movement has organized four rallies this year demanding dos Santos resignation.

President dos Santos in power since 1980, has been accused of avoiding public scrutiny and doing too little to fight corruption and of mismanaging the country’s oil revenues.

An estimated two-thirds of Angola’s 16.5 million people live on less than $2 per day in a country which is Africa’s second-largest oil producer after Nigeria.

President Dos Santos, 67, has ruled the African country for 30 years and is the ruling MPLA party’s 2012 presidential candidate. He is the continent’s second-longest serving leader after Libya’s Muammar Gaddafi.

In 2010, Dos Santos signed into law a new constitutional provision allowing him to extend his three-decade-long rule. The MPLA is the favorite party to win the general election scheduled for 2012,